World settling into slower structural growth rate, albeit with challenges: Conference Board 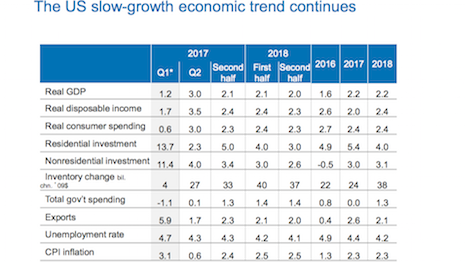 NEW YORK – The world seems to be getting more comfortable with a slower structural growth rate, although key challenges remain, according to the latest global outlook briefing by The Conference Board.

 Unemployment keeps falling, but labor supply is under pressure with the aging of population and little improvement in labor market participation

 Productivity growth looks better, but it is too early to see structural gains 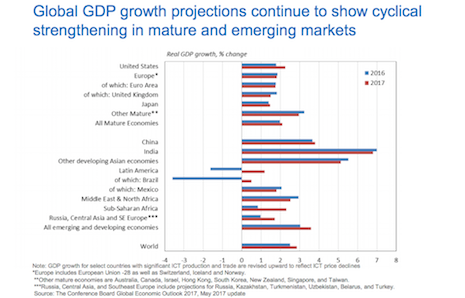 U.S. view
The growth trend of the United States economy continues at about 2 percent, based on the Conference Board’s half-yearly economics watch.

The service side of the economy is growing faster, while the cyclical uptick in manufacturing may be slowing.

Consumer confidence and housing demand in the U.S. remain favorable. But the outlook for non-mining business investment has not much changed.

“The consumer is pretty strong, still hanging in there,” Mr. van Ark said.

Finally, chances of a near-term fiscal stimulus have diminished, leading to a downgrade of government and private investment in the Conference Board’s forecast.

Different scenarios for U.S.
Uncertainties around the Conference Board’s base forecast for the U.S. remain high, according to Mr. van Ark. He outlined four scenarios.

Under the second scenario identified as “A bit of tailwind helped by stimulus,” high expectations continue to fuel optimism on consumer spending and investment, strengthening GDP growth to more than 2.5 percent.

Some fiscal measures are expected to pass before the end of the year, but pro-cyclical stimulus has limited effect as time passes and the business cycle matures.

The third scenario is the Conference Board’s baseline forecast, fetchingly named as “The trend trumps.” The slow growth trend continues at about 2 percent in the second half of this year since tax cuts and stimulus do not happen.

Under this forecast, oil and gas exploration leads investment activity. But business confidence weakens. The recent cyclical upswing may lose some strength.

Finally, there is the doomsday scenario, with a title tinged with understatement: “Demoralizing miscalculations.”

In this situation, policy mistakes, especially on trade, cause trade wars and collapse in confidence, leading to stalling of growth improvements. The U.S. Congress pushes back on deficit spending and the dollar weakens significantly. 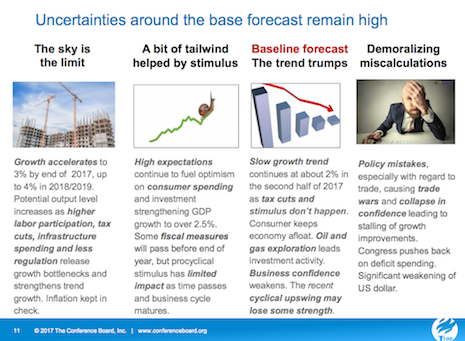 Uncertainties around the base forecast remain high. Source: The Conference Board

Consequences of U.K. elections on Brexit
While a softer Brexit comes more within reach as a result of the recent British elections, it will not bring an outcome within reach sooner, according to the Conference Board.

First, it becomes harder to pass through Parliament key domestic bills related to Brexit, including tax, trade and customs regimes, as well as the repeal of the EC Act of 1972.

Next, the support of the Democratic Unionists Party will require clearer arrangements upfront on an open border between Northern Ireland and the Republic of Ireland.

Finally, the success of the Tories in Scotland has brought support for a softer Brexit stance into the Conservative Party.

As a result of these factors, negotiations may drag on, benefiting neither the United Kingdom nor the European Union.

The U.K. economy is already weakening, Mr. van Ark pointed out, so clarity on the way forward is important for business.

Europe also needs to speed up reforms of its institutions rather than be distracted by negotiations with a member leaving the union. 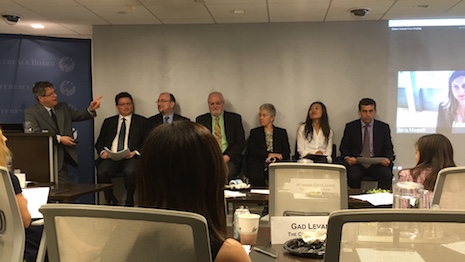 Risks ahead
So what are the other risks to anticipate worldwide for the rest of the year?

 Europe is challenged by changes in political dynamics in the U.K., France and Germany, even Italy, affecting Brexit and the reform of European institutions

 China’s role globally, and Asia Pacific, in particular, depends on a range of internal and external factors, including debt and default risks