65pc of affluents in developing economies plan to spend more on luxury in 2017: YouGov 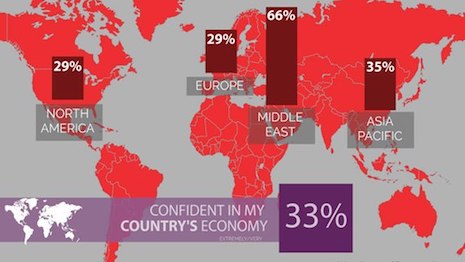 Sixty-six percent of affluent consumers based in the Middle East are confident in the state of their country’s economy, compared to the global confidence average of 33 percent, according to a new report from YouGov.

Affluent consumers are able to control their personal finances by spending wisely and investing, but they are reliant on the performance of their nation’s economy for stability. In the “Affluent Perspective 2017: The Mood of the Global Affluent” report, YouGov studied the attitudes, lifestyles, values and shopping behavior of the world’s wealthiest households, all of which are influenced by overall confidence levels.

"The affluent in the developing economies continue to be the most enthusiastic about purchasing more luxury today and in the future," said Cara David, managing partner of YouGov, New York. "They are the low-hanging fruit.

"In the developed economies, it’s all about increasing share," she said. "While they have an appreciation for luxury, their desire to spend more on luxury this year, and in the future, is low."

The Mood of the Global Affluent is the first installment of YouGov’s annual Affluent Perspective 2017 Global Study. YouGov considered the behavior of affluents based in developing and established economies.

Economic expressions
In its report, YouGov notes that the global affluent community has evolved into a “cohesive, connected group” whose members share common values. Today’s affluent community, regardless of where they are from, value honesty, intelligence, health and family above all else and equate these as the ingredients needed to live a fulfilled life.

Despite these similarities, there is a divide among affluents in established and developing economies due to factors outside their control. Confidence levels connected to their country’s economy are the differentiating factor of the world’s wealthy.

For example, Kuwait and UAE households are 76 percent and 66 percent confident in their countries' economies, respectively. 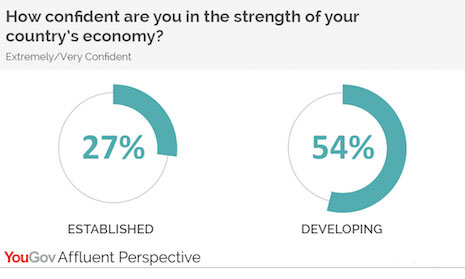 Developing countries are more confident in the economy than established nations; graphic courtesy of YouGov

But, not all developing economies are optimistic. For instance, South Korea-based affluents have a confidence of only 7 percent due to ongoing tensions with North Korea and other political controversies.

The U.K. is the most pessimistic of the established economies due to worries regarding how the country will fare after its exit from the European Union. Only 13 percent of U.K. affluent households surveyed by YouGov are confident in the country’s economy.

Confidence in personal finances are much higher than that placed on the country’s economy because it can be more or less controlled by the affluent individual.

Per YouGov, 46 percent of established economy households and 52 percent from developing economies are confident in personal finances. Kuwait and Germany are ranked the highest, at 76 percent and 68 percent, respectively, while the lowest confidence was seen in South Korea at 20 percent and 16 percent in Japan. 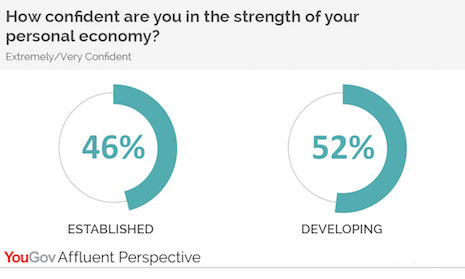 A recent Sotheby’s International Realty report backs up YouGov’s claims, finding that consumers who are close to achieving traditional wealth are largely positive about the status of their countries’ economies.

The majority of emerging affluent consumers believe that their nations’ economies are currently strong and headed on the right track. Beyond confidence in their national finances, consumers are showing an optimistic outlook for their own economic situation, creating opportunities for the luxury industry (see story).

Scaling back
Confidence levels of the world’s wealthy are intertwined with luxury spending and have led to consumers measuring financial decisions more carefully and deliberately than when more confident in personal and national economies.

In addition to varying degrees of confidence levels on both spectrums, YouGov found that affluent consumers find it difficult to give up luxuries once they have been experienced.

Fifty-nine percent of YouGov’s respondents from established economies said it is hard to scale back on luxuries, while 74 percent of affluents in developing nations said the same.

Established economies in North America and Europe have scaled back luxury spending, but Middle Eastern and Asian fervor for luxury is at its highest levels.

YouGov Affluent Perspective 2017: The Mood of the Global Affluent

In the upcoming segments of the Affluent Perspective 2017 Global Study due out next week, YouGov will examine the spending habits of U.S.-based millennials, who have shown apathy toward luxury (see story), Gen X, baby boomers and the silent generation.

"We can see from the data that those with the most confidence in their own personal P&Ls – today and in the future – feel the best about spending on luxury," YouGov's Ms. David said.

"Worldwide, the most enthusiastic spenders are the young adults who grew up privileged, are ambitious and taking advantage of the 'leg-up' they’ve been given," she said.