US luxury is well positioned to recover post-crisis: Coresight 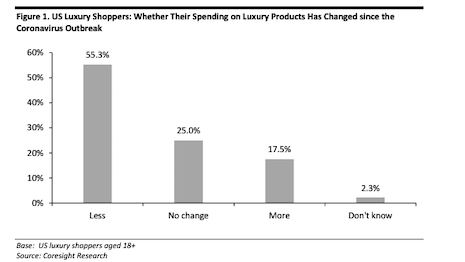 Along with other nonessential retail sectors, luxury has been hit hard by the global coronavirus pandemic. Luxury brands in the United States were forced to temporarily close stores, and international factories producing luxury goods endured closures as well.

Over half of U.S. consumers had been spending less on luxury products since the coronavirus outbreak began in February, according to a Coresight Research survey conducted on June 12, 2020.

However, the situation is stabilizing, with several “green shoots” pointing to increased spending by U.S. luxury shoppers.

The rapid rebound of the Chinese luxury shopper may well be repeated in the U.S., barring further waves of the virus that force re-closures and the implementation of quarantine measures.

We expect improved sales trends to begin in tandem with store reopenings, but it is unlikely that the luxury market will see a return to pre-coronavirus levels until 2022.

The coronavirus crisis dealt a significant blow to most discretionary retail sectors, including apparel, beauty and luxury.

In this report, we discuss the implications for the US luxury market and how its recovery could play out, incorporating proprietary consumer survey data. We also look at the early rebound of the Chinese luxury consumer post crisis for potential learnings for the U.S. market.

The heavy impacts of the coronavirus pandemic

As in other nonessential retail categories, COVID-19 caused widespread store shutdowns in the luxury sector. Furthermore, major players in the industry announced the temporary closure of production facilities amid the crisis.

French luxury brand Chanel announced on March 19 that it would gradually close its production bases in three countries: France, Italy and Switzerland.

Chinese luxury consumers: Depressed demand and spending opportunity
Chinese consumers accounted for 35 percent of total worldwide sales of personal luxury goods in 2019, up from 33 percent in 2018.

However, China’s luxury spending will have been significantly disrupted in the first quarter of 2020 due to the coronavirus pandemic.

Looking back at the lockdown phase of the crisis, we see that China was hit hardest in the first quarter of 2020, with the luxury industry mostly affected from February to the end of March.

The overwhelming majority of Chinese tourists canceled their international travel and spending plans from Chinese New Year at the end of January, and their desire to shop (especially luxury goods) was significantly depressed.

According to data from Fashion Business News in China, in the five central cities of Beijing, Guangzhou, Shanghai, Shenzhen and Wuhan, foot traffic in luxury shopping malls and flagship stores during the coronavirus outbreak fell by about 80 percent year over year.

Furthermore, flights were temporarily stopped from China to Australia, France, Germany, Italy, the U.K. and the US, among many other countries – eliminating potential international luxury sales during this period.

U.S. luxury consumers: Lower spending, fewer visits to malls and less traveling
According to a Coresight Research proprietary survey of U.S. luxury consumers conducted on June 12, 2020, more than half of respondents reported that they had been spending less on luxury products since the outbreak of the coronavirus in February.

This reduced spending reflects the shifting priorities of shoppers due to the unprecedented crisis – with a focus on health and essential categories over discretionary products.

The retail shutdowns in the U.S. from mid-March also reduced spending opportunity in all discretionary sectors, but with luxury lagging other categories in the adoption of digital retail – having only embarked on an ecommerce/omnichannel strategy in the past five or so years – sales retention by luxury companies was severely inhibited during lockdowns.

The reported decline in consumer spending also reflects economic uncertainty: The performance of the stock market is a factor in driving luxury spending for nearly 20 percent of survey respondents.

Notably, 67 percent of respondents in the $175,000 – $200,000 annual income bracket stated that the stock market affects their luxury spending; the wealth effect exerts more than three times the average impact on this cohort.

Although stores and malls in the U.S. are now gradually reopening (as we discuss later in this report), most of our survey respondents reported that they are visiting shopping malls less often than prior to the crisis, according to our survey – reflecting that health concerns persist.

With luxury shopping on pause during lockdowns, many retailers diverted parts of their operations to assist in battling the coronavirus pandemic.

Consumer sentiment
Consumer sentiment in the U.S. is stabilizing and showing initial signs of improvement, according to Coresight Research’s weekly surveys of U.S. consumers: We have seen a recent decline in shoppers’ expectations to avoid shopping centers, public places and international travel.

We believe that expectations of avoidance behaviors have hit the nadir, and the optimistic signs of consumers returning to pre-crisis habits bodes well for all retail – and luxury specifically.

Furthermore, our conversations with executives at numerous luxury brands in the U.S. reveal that during lockdowns, consumers had been engaging with brands online and via other touch points – such as through social media, by placing orders over the phone and by making video-call shopping appointments with store associates – and they have expressed eagerness to return to stores when it is safe to do so.

One global luxury brand told Coresight Research, “Our clients have not stopped shopping and are calling regularly to complete a purchase and arrange for its receipt.”

Another luxury executive told us that “the luxury shopper is fine; it’s the stores that are closed. Address their top concerns of safety and health and they will return to stores and spend. Meanwhile, consumers have happily adapted to alternative methods of making purchases.”

So far, a number of reopened U.S. apparel and luxury retailers have reported stronger sales than expected at reopened stores, exhibiting pent-up demand for nonessential goods and shopping in physical locations.

After a few months of quarantine and self-imposed isolation, consumers desire social interaction in retail formats if they perceive it to be safe. This bodes well for many monobrand luxury shops that are palatial in size and can easily support appointment selling – two attributes that help mitigate the perceived risk of infection.

It should be noted that luxury venues are among the locations best suited for implementing social distancing measures to ease shoppers’ concerns in the wake of COVID-19, given their typically spacious designs and the shallow levels of product on the shopping floors of luxury brands – in both department stores and standalone shops.

In fact, according to WWD, president of Saks Fifth Avenue, Mark Metrick, said on June 22, “Even on our busiest day of the year, we don’t have that many in the store; we were built for social distancing!”

The coronavirus crisis has changed consumer behavior in ways that could potentially benefit U.S. luxury spending:

According to Mailonline.com and CNBC, ecommerce drives consumers to make a store visit, if only to avail store and curbside pickup services.

Luxury growth to resume post-COVID-19 overhang
We expect that the post-crisis overhang will affect the luxury sector through 2021, but, as the sector gains momentum, growth should return in 2022.

Our weekly surveys of U.S. shoppers ask respondents who are buying less of any products how long they think it will be until their spending will return to normal (i.e., pre-coronavirus).

As the pandemic progressed, we saw a rising trend in consumers believing that the crisis would impact their spending in the long term:

The “longer than six months” option was selected by about one-quarter of respondents in April, increasing to around one-third in May and early June.

We are likely to see this have the most significant effect on discretionary categories such as luxury, with essential products taking priority for shoppers amid the crisis.

Looking back to the 2008 financial crisis further informs our estimates of the luxury sector’s recovery following COVID-19.

Selected luxury brands experienced only one year of an aggregate sales decline followed by a return to double-digit growth in 2010. Applying this to the current situation, we would see the 2020 crisis impact 2021 luxury growth, before the sector bounces back by 2022.

China luxury market: A rapid return of demand
China experienced a rapid return in luxury demand as the coronavirus quarantine came to an end.

Although the progression and containment of COVID-19 in China and the U.S. have followed different trajectories, we can derive insights from Chinese luxury shopper behavior post-lockdown to inform expectations for the U.S. market.

Although we do not expect to see a return to 2019’s levels until late 2022, we anticipate a return to year-over-year growth by late 2021.

Luxury, like most nonessential categories, came to a grinding halt due to the COVID-19 pandemic, but it is gradually recovering as stores reopen and retailers adapt to the new normal.

This report was authored by Deborah Weinswig, founder/CEO of Coresight Research, as well as Marie Driscoll, managing director for fashion and luxury, and Coral Zhang, research analyst. Excerpted with permission.