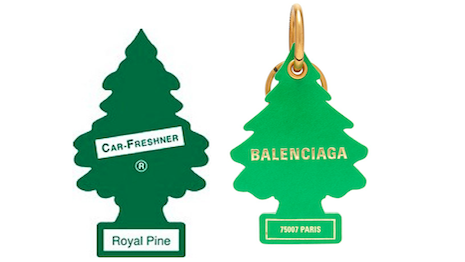 Pining for rights: Car-Freshner's $3 car freshener to the left and Balenciaga's $275 key chain to the right. Image credit: Springut Law

I wrote recently about a copyright infringement suit by a New York souvenir company against Balenciaga for copying its designs.

Now, Balenciaga has gotten in trouble again – this time for copying the well-known design of a commonly used car freshener shaped like a pine tree and usually hung from the rearview mirror.

Forbidden tree
Although these items are far from being luxury items – a package of three sells for $3 at Target – their design is well known.

This is now the second time that Balenciaga has been sued in New York’s Southern District court for misappropriation of the design of an inexpensive product for use as a luxury product, in this case, a $275 key chain.

Examine the pictures of the Car-Freshner product and Balenciaga’s accused key chain. The similarity is unmistakable.

Car-Freshner is not asserting copyright rights – but what is known as “trade dress” rights – where the design of a product or packaging functions as a trademark identifying the product as that of the manufacturer.

Car-Freshner has several federal registrations for air fresheners for such a design, and since the design has been sold dating back to the 1950s, it probably has a strong mark.

The use of a “house mark” can dispel confusion.

So, Balenciaga might argue that its use of BALENCIAGA on its product makes clear who made it – Balenciaga, not Car-Freshner.

But this would, in our view, not be helpful defense.

“Confusion” is not limited to who made the product. The law recognizes what is known as “confusion as to sponsorship.”

License to shill
Sometimes one company will make a product, but another will license its trademarks for use on it in the hope that the use of both marks will increase sales.

Such “co-branding” arrangements are increasingly common, and the law recognizes that a trademark could create confusion that a company licensed its mark for that product, even if it did not make it.

In fact, Car-Freshner itself engages in such co-branding.

While its primary product is car fresheners, its complaint alleges that over the years it has licensed its trademarked pine-tree design for luggage tags, key rings, T-shirts and other products. And, it further alleges, that it recently granted a license to designer Anya Hindmarch to use the tree design in connection with high quality hangtags to be sold for hundreds of dollars.

Car-Freshner’s best argument then is not that there would be confusion that it made Balenciaga’s key chains, but that consumers would believe that it had sponsored or licensed these designs to Balenciaga in a co-branding arrangement.

Fails the smell test?
In my last article we noted the need for a company to do due diligence before it introduces products that might infringe others’ rights.

At this point, however, it appears not that Balenciaga is careless but may be that it is simply indifferent to whether it infringes others’ designs.

While the souvenir design in our last article is fairly obscure, the Car-Freshner design is very well known, even famous, at least in the United States. One has to wonder whether no one in Balenciaga realized the design was being copied.

Some companies view charges of infringement as a “cost of doing business.” The gain, e.g., instantaneous hype, from appropriating a popular design or symbol outweighs the nuisance of a lawsuit or even a damages payment.

Such an approach, however, can open up a company to tremendous exposure.

Trademark law allows for what is known as “disgorgement of profits” where bad faith infringement is shown.

Courts have emphasized that it is crucial that all profit be taken out of infringement to discourage it. In especially egregious cases, the law even allows for treble profits.

Another danger point is that in calculating profits, some courts have even allowed for an award of indirect profits – for example, if an infringing item is used to draw customers in who then spend money on other non-infringing items, then a court might award part of the profits on those other items.

A company that infringes in bad faith potentially leaves itself open to very significant liability.

AS I OBSERVED in my last article, infringement is not limited to the cheap from the expensive.

Balenciaga seems to have become the poster child for exemplifying the opposite: luxury misappropriating from the commonplace.

While that might be motivated by some creative impulse, Balenciaga may yet learn that such an approach may cost it dearly.