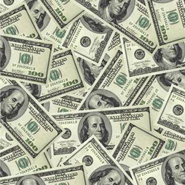 Personal fulfillment is the number one reason ultra-high-net-worth individuals indulge in philanthropy, according to a new survey by Wealth-X.

Philanthropy has long been a hobby of the world’s wealthy, and even the global recession of the late 2000s has done little to stop the trend from continuing. However, as income inequality remains a global conversation, brands will need to appeal to these philanthropic habits and define themselves on these values rather than status and price to appeal to UHNWIs.

"The great paradox of wealthy individuals which applies to all of us, is that they give based on the psychology of how they feel," said David Friedman, president of Wealth-X, New York. "So, while the market gyrations may in many cases not impact directly their net worth and they still have plenty of money to spend, they may 'feel' less well off or that their net worth is diminishing and this definitely will impact their philanthropic giving.

"On the other hand, should a specific topic or issue resonate with them, that may override whatever psychological inhibitions they are experiencing."

The Wealth-X Attitudes Survey, conducted with Knight Frank, surveyed more than 400 of the world’s leading private bankers and wealth advisors, who combined for the management of $500 billion across 45,000 individuals.

Pay it forward
Despite the reputation the richest people in the world have for protecting and increasing wealth, a significant portion of them prioritize charitable donations and other methods of giving away their wealth. Bill Gates has donated more than $28 billion to his eponymous foundation, and Facebook founder Mark Zuckerberg and his wife Priscilla Chan recently promised to give away 99 percent of their shares, or the equivalent of more than $44.5 billion.

Though the conversation in parts of the world has vilified the wealthy in recent years, two thirds of those surveyed in the Wealth-X Attitudes Survey said that over the past 10 years, clients’ philanthropic tendencies have improved, and 80 percent overall expect it to do so over the next decade. Only 2 percent suggest it would decrease. 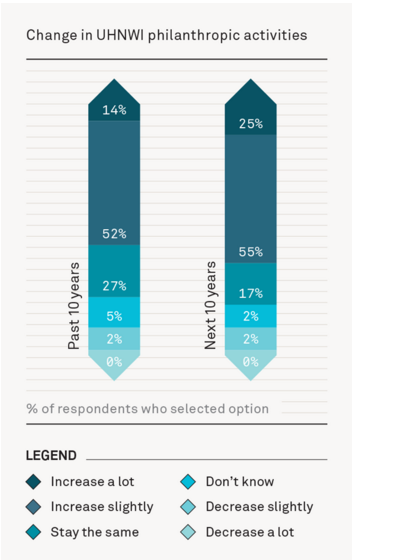 "There are several key trends driving growth in philanthropic giving: increased transparency and Return of Mission is among them," Mr. Friedman said. "With the meteoric rise of such firms like Charity: Water who devote 100% of all giving to their projects and bifurcate their operations budget from the actual giving.

"Furthermore, the growth of ultra affluent giving among the new generation of tech driven wealth has catalyzed necessity for more sophisticated reporting infrastructure to communicate success and performance of philanthropic giving which is increasingly being viewed as 'philanthropic investments,'" he said.

"Also, the normalization of impact investment frameworks which can encompass a range from liquid equity portfolios aligned with social causes to private equity investments with double bottom lines has further redirected allocations to this asset class."

Fifty-two percent of respondents selected personal fulfillment as the biggest reason for giving, followed closely by “a sense of purpose” and “a sense of duty or responsibility” for 51 percent and 48 percent, respectively. Thirty-six percent claimed their donations were made with the express purpose of making an impact on others, aiding their own legacy or for tax relief.

The statistics vary noticeably by region, with the sense of duty being most prominent in Europe and especially in North America. In the Middle East, 41 percent cited religion as a reason for giving, and in Latin America twice the global average noted the importance of effective philanthropy.

Brands hoping to attract high-net-worth consumers should take note of these regional differences. Appealing to a sense of responsibility might be an effective tactic in North America and Europe, while transparency of partners is more important in Latin America.

The attitudes survey also revealed that taxation, inheritance issues and the global economy are the biggest impediments to future wealth creation and preservation. A hindered economy is especially worrisome to Australasians, a reflection of the fact that the now-slowing China has spurred much of the region’s wealth creation. 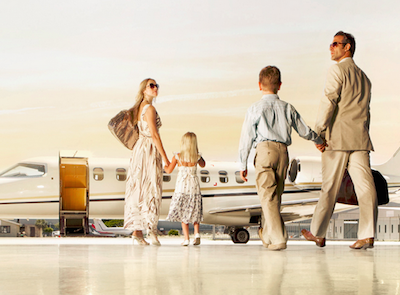 Societal attitude changes are also reflected in the attitude survey. Two-thirds of respondents said their clients are self-conscious about displaying wealth in public, and a similar number of Latin Americans have cited personal security and safety as big concerns. Many respondents said the government was scapegoating UHNW individuals for wealth inequality.

The simultaneous desire to continue with charitable endeavors and the shifting attitudes about the wealthy means that some brands, to reach these clients, need to continue defining themselves by the causes they fight for rather than the prices of goods and services.

Giving back
While the charities supported by UHNW individuals vary, educational-related organizations and causes accounted for the greatest number of gifts made by affluent philanthropists, with the average gift size being $4.1 million for education and $11.8 million for higher education. This is representative of the importance affluents place on education, often giving back to their alma maters.

The #JoyToYourWorld partnership furthers the gift-of-giving ideology by bringing joy to the lives of children with life-threatening medical conditions. The effort brought together crowdsourcing and social media to donate to Make-A-Wish International’s cause (see story).

"At the end of the day, the biggest givers are driven by either an experience they had either themselves or from their family or close relationships or from an experience created by an non-profit, but either way, the motivation will be experience driven," Mr. Friedman said.

"The other key driver for donor activation, will be referrals by a trusted friend. This is one of the key ways for increasing new major donor strategies is by leveraging existing board and key donors to engage their social graph. Sophisticated non-profits are pro-actively analyzing and segmenting by net worth and passion/hobbies/interests the social graphs of their key board, relationships and donors."