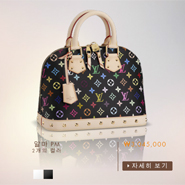 NEW YORK – South Korea's popular culture, brands and blazing Internet speeds are propelling the country into territory that has long been occupied by the United States, according to L2's founder at the L2 Forum Nov. 10.

Whether it is a multinational beauty brand taking cues from South Korean labels or Seoul's rapid climb up the luxury mountain, the Southeast Asian country is disrupting global dynamics on a few fronts. Another disruptor on the minds of luxury players is Amazon, the online megastore that L2 predicts will have the largest bricks-and-mortar footprint in the U.S. in the coming years.

"There is another arbiter of cool," said Scott Galloway, founder of L2, New York. "Korea."

Mr. Galloway began the L2 Forum with the company's predictions for the year ahead.

To underscore just how influential South Korea is becoming, he showed a slide of two rows of nearly identical beauty products, noting that one row came from South Korean brands and the other row came from established beauty players such as Lancôme.

Generally, you would assume that the row of established brands had came out with the product designs first and then the smaller brands copied. In reality, the reverse happened.

After the local brands in Korea introduced their products, the multinational brands made imitations.

"Revenge of the Brick"
Amazon's Achilles Heel is the high price it pays for shipping products super fast. Although it has earned consumer affection for getting products on doorsteps within a day or two, it has incurred serious costs as a result.

Meanwhile, click-and-collect has "caught the world of retail by storm," according to Galloway.

Instead of letting competitors such as Best Buy exploit this vulnerability without consequence, Amazon has been on a tear for retail space, setting up shipping centers for the time being, but likely scoping out venues for consumers to visit.

L2's co-founder Maureen Mullen thinks that the retail space of gas stations may be of interest.

Ultimately, Amazon wants a pipeline into every home and is willing to lose billions of dollars in order to reach this goal, according to Galloway.

British retailers, such as Selfridges, tend to lead the way with innovations

In a similar vein, pure players of any stripe are heading toward some rough times if they do not make cross-channel investments.

Another loser will be the hospitality industry, which the sharing economy wants to eviscerate.

To corroborate this claim, Mr. Galloway pointed to the ire of New York politicians who have been looking to punish AirBnB benefactors.

"The ultimate indicator of when an industry is about to explode is when politicians get angry," Mr. Galloway said.

L2's latest social media report argues, among other things, that Facebook orchestrated the biggest bait and switch in marketing history.

The platform first let brands build massive communities, then crimped their ability to reach these audiences unless payments were made. 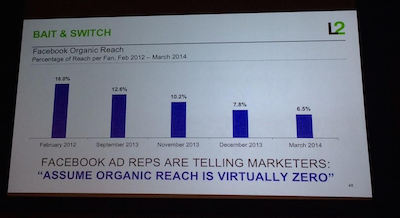 From the L2 Forum

What had at first seemed too good to be true, became a necessary burden. After all, a brand cannot just go silent on Facebook.

Indeed, Facebook has won the social media war, according to L2, and has made some of the shrewdest acquisitions in the past decade, most notably with Instagram.

The platform's ability to track consumers as they traverse the Internet offers significant value to brands who will soon be able to advertise through Facebook wherever consumers go.

Many luxury watchmakers had scoffed at the Apple Watch when it first arrived. The price points were too low and the craftsmanship that inspires luxury purchases seemed to be absent.

Sales of the Apple Watch are projected to be between $9 billion and $18 billion in 12 months, according to Morgan Stanley, and the watch market will not simply grow by this margin.

Instead, the Apple Watch will siphon sales from somewhere. Mr. Galloway said that rather than hurting the cloistered luxury watchmakers, the product may cut into revenue of aspirational brands such as Tumi, Michael Kors, Kate Spade and others. 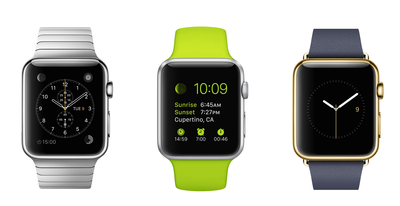 Teens, a major demographic for aspirational brands, are spending less on apparel and more on technology. More of their budgets are also going toward food, a clear sign of the times.

Regardless of the form this disruption takes, Apple, which has also become the largest payment platform in the world, is eager to feast on the luxury market's profits.

Making this transition will be not challenging, since Apple already meets the criteria of luxury brands.

"All the things that hit your heart, not your head, are linked to Apple," Mr. Galloway said.